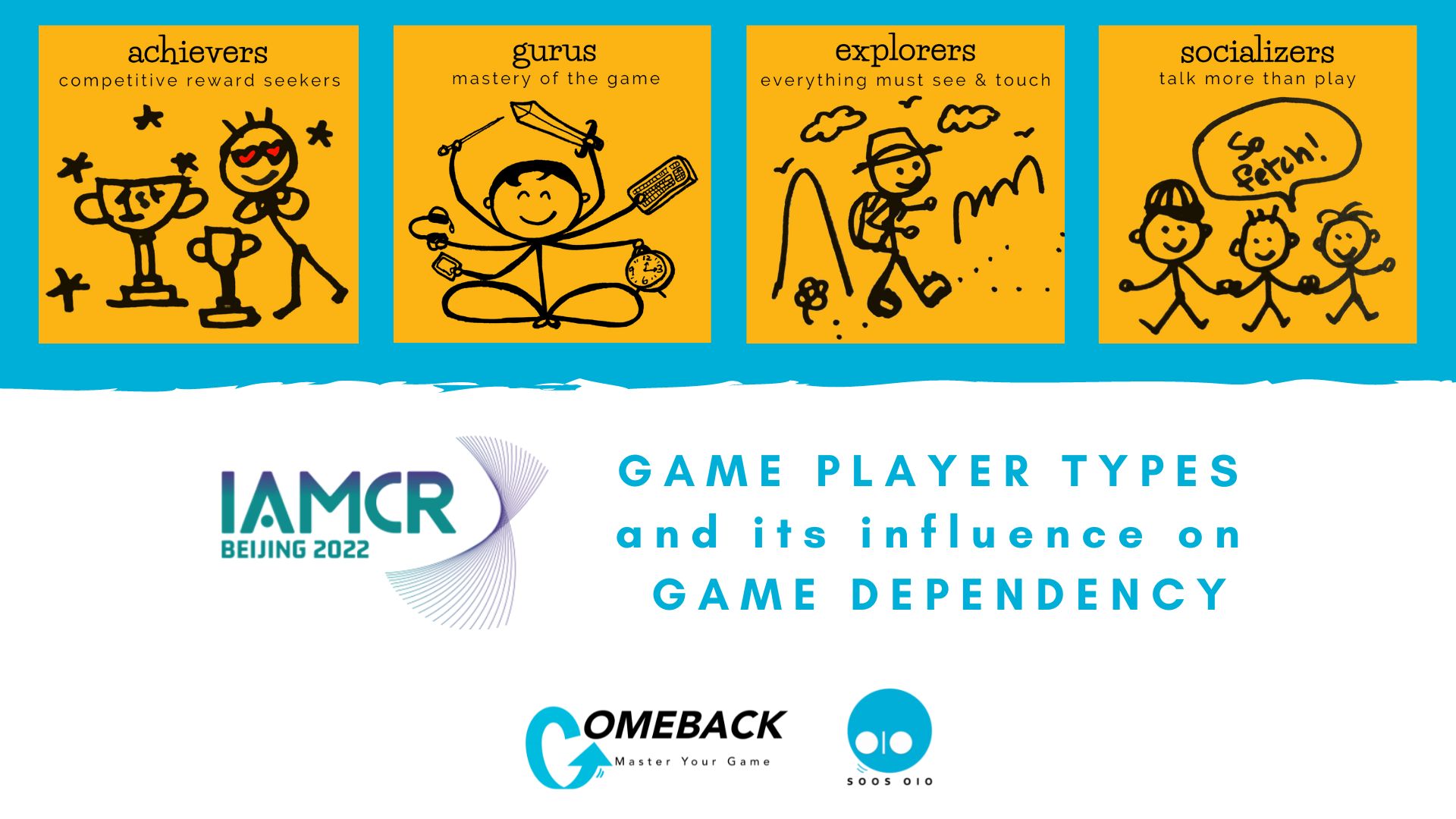 We presented our paper “Game Player Types and its Influence on Game Dependency” at IAMCR Beijing this year and got good reviews. Below is the abstract of the paper:

This study investigates the relationship between video game dependency and player type typology.

As video gaming grows to become an integral part of the lives of many youths, concerns about the consequences of excessive gaming have emerged too. These concerns appear to be grounded as video games have been reported to damage family, school, social and psychological functioning – collectively describing the effects of game dependency (akin to gaming addiction measures). Moreover, over the years, various gamer typologies have been developed to provide insights into the different behaviours and motivations of gamers. While these typologies were initially developed for game designers to create more appealing games, their applicability has since extended beyond. This study adopts such gamer typologies and established a framework of player types (Achiever, Guru, Socializers, Explorers) and investigates its influence on game dependency.

Secondary school students, aged 13-17, were invited through schools to participate in an online survey. Data was collected with the permission of the respective schools to be used for research purposes. A total of students (n=999) was included in the sample, gathered from three secondary schools in Singapore. Game Dependency measure satisfied the reliability criteria with a Cronbach alpha of 0.94. Correlational analysis and comparison of means were performed on the data collected.

Our findings showed statistically significant support for H1 and H2. This study explains that Socializer player type, who are more people- than game-centric, are more likely to follow their social contacts in a game, and expand their social network and resources. And as such, they are more likely to play with their friends and would hence have a lower game dependency. On the other hand, Explorer player type may spend less time in games due to the limited exploratory possibilities present; they may choose to exhibit these tendencies by viewing videos or talking to other players. These constitute activities outside video gaming that is not captured in the current tool used to capture game dependency. The Explorer player type also do not enjoy challenges within the game and may thus stop playing once the games get difficult. Therefore, Explorer player type requires the least measure of commitment (i.e., time, effort, money), which in turn causes an opposite influence on their game dependence.

While the measures used are theoretically derived and consistent with other studies, this study went a step further by quantitatively showing its association between the two variables and discriminating between game dependency groups. This study provides a nuanced understanding of the Uses and Gratifications Theory, demonstrating how different gamer types (akin to gratifications) plays the game (akin to game dependency). While nascent, this venture has proven useful for identifying problematic in-game tendencies, thus informing the rehabilitative work among pathological video gamers, which the authors seek to undertake.

The abstract can be found at https://iamcr.org/beijing2022/abstract-books. Look under Audience Section and it will lead you to download a PDF with all the abstracts from the section. Our abstract is found in page 11 of the PDF document.