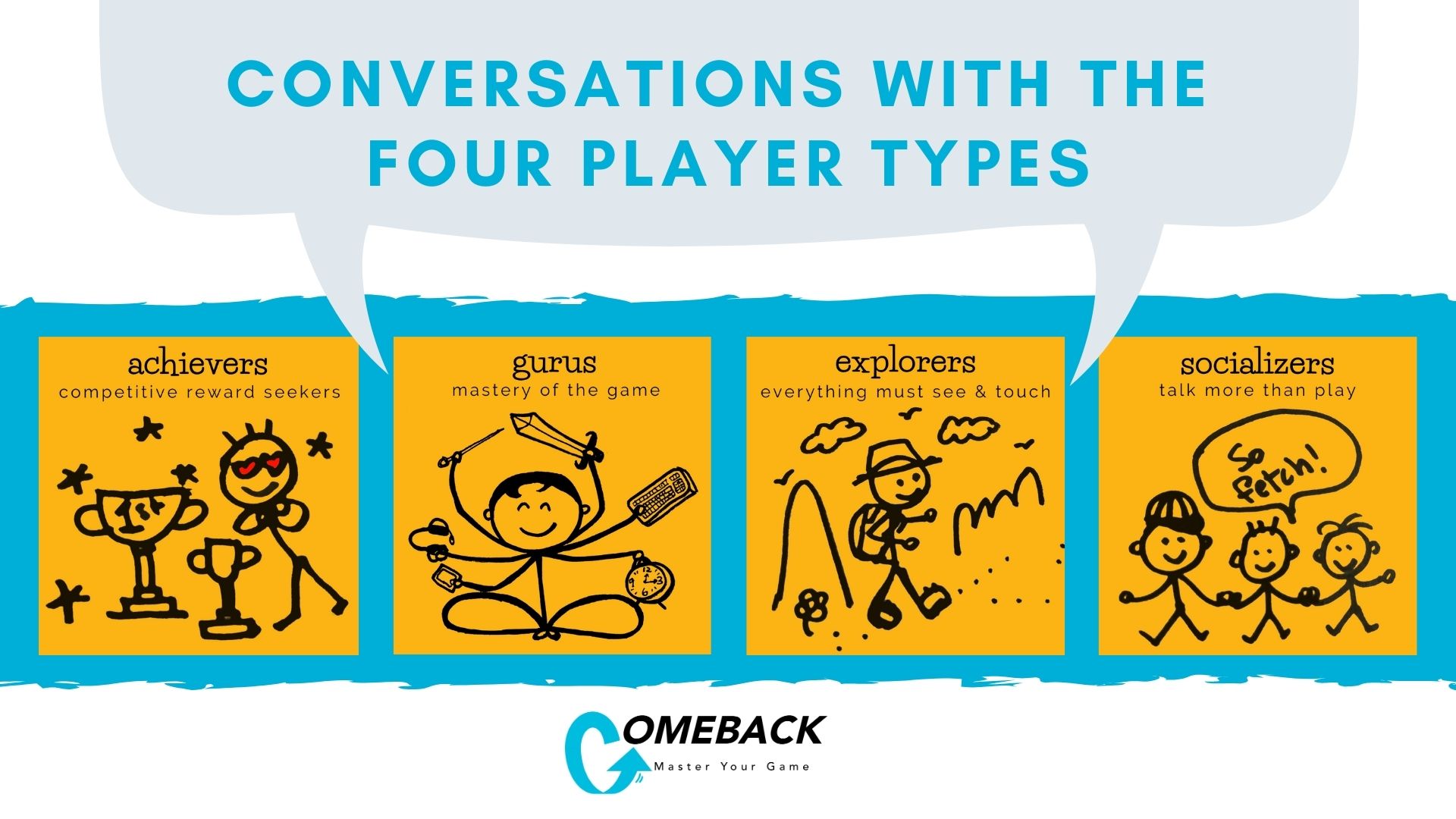 One common concern that we often hear from parents is regarding how to connect with their children. Busy schedules, coupled with the increased accessibility of games and gaming devices, have made it difficult for parents to bridge that gap. At COMEBACK, we do not just see how games have led to a disconnect, but also how we can also leverage on the games to build back that connection. In this post, we aim to highlight some ways that parents can connect with their children – by adopting the right approach and having targeted conversations based on the child’s individual personality.

Before we delve into the how, we must first discuss the when. Typically, we always advise parents to steer away from having conversations with their children in the midst of their games, whenever possible. Gamers tend to be fully focused on their games and in-game communications, which leave little room for proper conversations to happen outside of it. As such, a typical response tends to be brief and even one-sided. Worst yet, a frustrated gamer may even blame their losses on you. Not a good start for a conversation!

Appropriate timings tend to be periods where the child is not engaged in any games, and/or in-game conversations. Better yet, catching them right when their gaming session ends can be a good opportunity – they might still be fresh with emotions from the previous games which can compel them to share more.

It is not uncommon for parents to face resistance from their child when first probed about their games. The thing is, many gamers may have faced disregard and disapprovals from adults regarding their games, and hence might be expecting the same response again. Therefore, it is critical for parents to adopt the right approach toward engaging the child, which can be elaborated into three key points:

Some parents might find that their child is taking longer than expected to warm up, despite adopting the right approach. There is no quick fix. Connection may take a longer period and numerous attempts to eventually develop, depending on the child’s personality and the level of defensiveness that they have adopted over the years. These attempts can be viewed as the child testing the waters to know that you are genuinely reaching out to them. Afterall, they want to know that it is a safe space for them to begin sharing.

Once the child is willing to be engaged, the next step is navigating the conversations about their gaming world. Understanding the child’s player type can help you to guide the conversations toward their interest and facilitate sharing. If you have not done so, we would highly recommend you to first read up on the four player types in our blog post to have a basic understanding. Parents may also direct their child toward our player type test in order to know which player type their child belongs to.

Achievers desire to be seen as being competent over others. This motivates them toward seeking for achievements through games, such as achieving high ranks or levels, acquiring strong in-game characters and items, and many more. Essentially, these achievements serve as trophies that illustrate their competency, and it is not uncommon to hear achievers declaring and striving for big goals (e.g. joining a professional esports team).

Conversations with achievers would usually revolve around them sharing about their in-game achievements and goals. For example, they may show you their in-game trophies, replay video-recorded moments of their games (e.g. making an impressive game-deciding play), or sharing with you their game-related aspirations.

Although all these may sound like bragging attempts, achievers are ultimately just looking for affirmation. Simply listening and even affirming their efforts can go a long way to making future conversations happen, even if the achievements or goals may seem trivial or even unnecessary. Afterall, their willingness to share means that those achievements do matter to them. Here are some game-related handles to facilitate early conversations with achievers:

Socializers desire to feel a sense of belonging in the community. Games, particularly multiplayer ones, provide the opportunity to participate in social activities with other gamers. They enjoy the thrill of simply playing with others, interacting and having conversations whilst playing – in fact, you may find some even talk more than they play!

Because socializers are so socially attuned, they are often in-the-know of the latest happenings and trends among their peers, or even the gaming community at large. Thus, conversations with them tend to revolve around sharing about their social interactions, discussing about their gaming peers and personalities (e.g., popular streamers), and even the latest gaming trends and topics.

While all these may appear as “small talk”, the socializers derive their sense of belonging through being in-the-know. Hence, it is important to listen without judgement and avoid trivialising their sharing. This helps them to fulfill part of their social needs with you and build that all-important connection for future conversations. Here are some game-related handles to facilitate early conversations with socializers:

Explorers value having immersive experiences within a game itself. Unlike achievers and socializers, explorers do not actively require the participation of the gaming community, and can even be content with enjoying single-player games. Nevertheless, such games must be intriguing and captivating to them. This is typically in the form of a well-designed game world and characters, with deep storylines and unique features. They are naturally ‘kaypoh’ (a Singaporean slang for busybody) in the game world, as they often want to experience all the different aspects that the game world has to offer.

Conversations with explorers involve them sharing about all the interesting aspects in their games. This can include their favourite characters, interesting storylines, secret bosses that they discovered, and many more – basically anything that has captivated them in their games.

Hence, a typical conversation with an explorer can be expected to last longer compared to other player types. Parents need to take that into account, and refrain from starting conversations that may result in having to leave halfway. It may be necessary to set aside a certain amount of time for such conversations (e.g. one hour), as well as be upfront about the time you have together. Here are some game-related handles to facilitate early conversations with explorers:

In the simplest sense, gurus desire knowledge and understanding. How this manifest is an innate desire to master their games completely. Unlike achievers, they are not overly concerned with how they perform compared to others, but are mainly focused on understanding how the game works and developing strategies to beat it. In other words, while achievers are outcome-driven, gurus tend to be process-driven. Gurus often have no qualms about replaying the same game multiple times, if it means being able to refine their current strategies further.

It is necessary to manage expectations when conversing with gurus. Conversations can be very short, direct, and seemingly one-sided – although this may not reflect any disinterest. This may be simply due to their nature of being rational and precise, as they may answer only when they are certain of it. Rather, they become disinterested when conversations become emotionally-charged, or revolve around very basic discussions (e.g. basic rules in their game) about the guru’s expert topic. Unless the parents are well-versed about games, it may be best to avoid the topic of games with gurus, as such conversations can become extremely technical and difficult to navigate through. Hence, we will provide some pointers toward how to engage a guru, instead of game-related conversational handles.

Parents wanting to engage gurus may want to consider the following points: avoid small talk, use logic and reasoning, and be prepared to lead the conversations. In any case, do not be offended about their short responses. Showing negative emotions, such as anger and frustration, is a quick way to disconnect from the guru.

Through explaining the four player types, we hope that parents have a better understanding of how their children think and behave. This can provide some insight into how to approach and navigate through conversations with their child, based on their individual player types. In our work, we realise that sometimes a little adjustment in the way we approach, can spark the beginning of a healthy, two-way connection with the gamers.